These links to third party sites are provided without any warranty or liability. Please contact us if the links are broken or if you are the administrator of a website who would like to be added to or removed from the list.

""The LNWsoc aims to collect and disseminate information about the London and North Western Railway, its constituents and its successors.

We are interested in the infrastructure of the railway, the men and women who made it work, as well as the engines and rolling stock which it built and used. We aim to help modellers, preservationists, historians and those with just a passing interest in the LNWR."

The Model Railway Club is the oldest model railway club in this country. It was founded in 1911. It features a permanent home in Keen House near Kings Cross station, London. Meetings are held weekly.

The annual show at Alexandra Palace is well worth a visit. 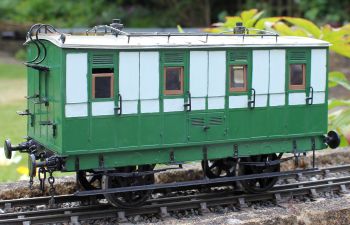 It has a number of valuable resources on-line.

An article appeared in "Model Rail Magazine" in July 2019 describing a Mess hut as a scenic feature based on our NBR milk van kit (NB04-W001) The Modeller is George Dent and the article is reproduced in his blog, link below.

The Gauge 3 society caters to the needs of G3 modellers. There is a forum and products for members.

G3 is a lot of fun, even in small spaces. Unlike their smaller bretheren, G3 models are impressive to hold and behold.

G3 is scaled at 13.5mm to one foot. G3 used to be known as "standard gauge" before the miniature "O" and tiny "OO" took over. One reason for turning to G3 is because it reminds me of an time, ages ago, when a tiny primary school boy walking home in dreary London stopped at a shop on Islington Green in order to gaze at the trains in the brightly lit window. The schoolboy went in and was humoured by the sales assistant. The trains were huge and a particular engine was an impressive shade of green. The shop and schoolboy have long disappeared but the memory remains.

British Railway Modelling (BRM) forum has several interesting and useful discussions and reviews of our products:

Originally titled "21st century Modelling" is an article I wrote in 2008. I think it has aged well. At the time there were no 3D printers or laser cutters available at a decent price.

These days many of the concepts in the article are taken for granted, just like computers and 3d printers. Anyone who has tried to use these tools will know that it takes hundreds if not thousands of hours to master the hardware and design processes.