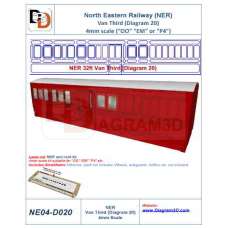 Mouse Over image to Zoom
Click on image to select

This carriage was one of a series of 32ft six wheeled carriages which were designed and built by the North Eastern Railway in the latter part of the 19th Century. They used a standard underframe and replaced earlier vehicles. This model represents a Guards can with two third class compartments (diagram 20). The NER inventory contained about a hundred similar vehicles in the 1890's.

The design of this model features a detachable roof.

A difficult and tedious task encountered when modelling rolling stock is the preparation and cutting out of the windows, droplights and panels.

This kit reduces the tedium, complication and labour associated with the construction of a detailed model of a coach body using accurate laser cut layers conveniently assembled in our SmartFrame without specialist knowledge to give the same quality, or better, as traditional methods using plastic or etched components.

There are four precisely alligned layers for the coach sides which reproduce window apertures, droplights, window frames, panelling, and beading. Floor, partitions, roof members, ends complete with steps and panelling are included together with pre-cut glazing. In summary, all the essentials to make a convincing representation of this early panelled coach body.